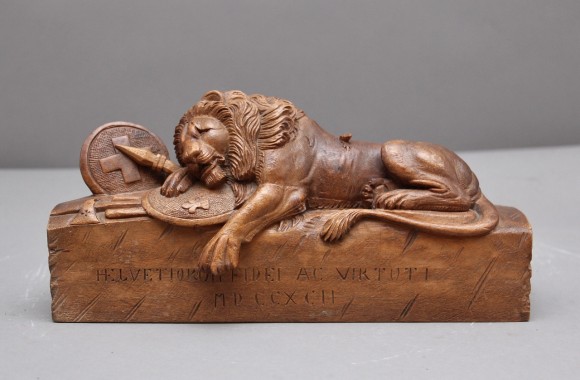 19th Century carving of the lion of Lucerne

19th Century black forest walnut carving of the lion of Lucerne resting upon armour and weapons. Lovely quality and crisp carving. Circa 1880.

The Lion Monument, or the Lion of Lucerne, is a rock relief in Lucerne, Switzerland, designed by Bertel Thorvaldsen and hewn in 1820–21 by Lukas Ahorn. It commemorates the Swiss Guards who were massacred in 1792 during the French Revolution, when revolutionaries stormed the Tuileries Palace in Paris. It is one of the most famous monuments in Switzerland,

Mid 18th Century oak dresser
We use cookies to ensure that we give you the best experience on our website. If you continue to use this site we will assume that you are happy with it.Ok
Scroll to top