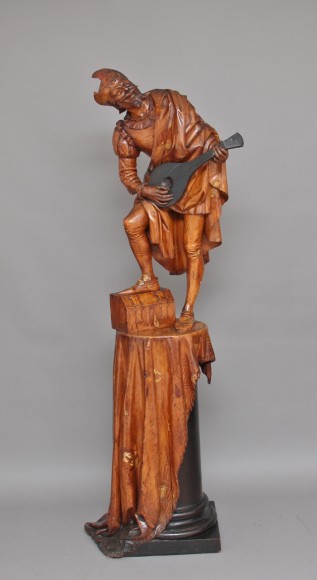 An outstanding 19th century Italian carved wood sculpture of a bearded troubadour playing a mandolin standing on a draped pedestal with one foot on the pedestal and the other on a casket, carved in limewood by the famous Italian wood carver “Valentino Panciera Besarel” (zoldo 1829-1902)

Valentino Besarel – 1829-1902 – won great acclaim at the Vienna exhibition in 1873 and won a gold medal at the 1878 Paris exhibition, his clients included prince of Wales (later Edward VII) grand dukes Serge and Paul of Russia, prince Frederick III of Germany, the king of Italy and many other members of European royalty. This piece is signed “V Besarel Venezia” and dates from the late 19th century.

This piece is in very good condition for it’s age, but there are minor splits due to it’s age.

18th Century oak maitre ‘d’ stand / desk
We use cookies to ensure that we give you the best experience on our website. If you continue to use this site we will assume that you are happy with it.Ok
Scroll to top