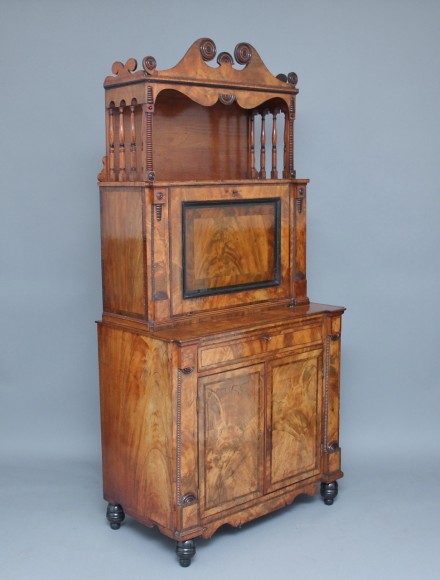 A lovely quality 19th Century mahogany escritoire by, or in the manor of William Trotter of Edinburgh, the top structure having a shaped swan neck pediment with carved patraes with the sides decorated with turned spindles, at the front as well as the lower sections there is carved beading which runs down along the sides of the cabinet, the middle section having a drop down flap opening to reveal a green leather writing surface, with various drawers of all different sizes including a secret compartment with two drawers, there is also a mechanism which can be unlocked to open the side sections which pull out which includes fitted compartments, with a single drawer below and a two door cupboard with a single shelf inside, standing on ebonised turned feet. Circa 1830.

19th Century satinwood center table
We use cookies to ensure that we give you the best experience on our website. If you continue to use this site we will assume that you are happy with it.Ok
Scroll to top