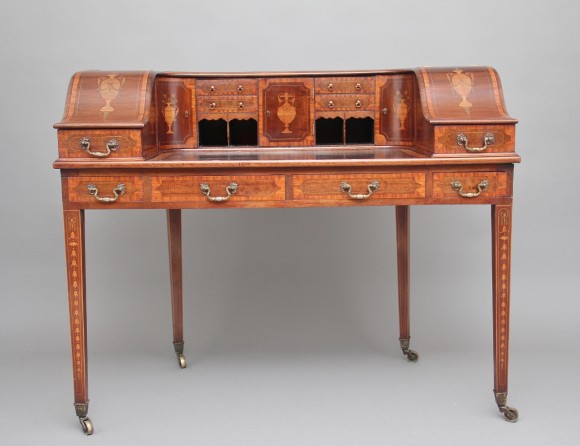 A fabulous quality early 20th Century mahogany Carlton house desk on four square tapered legs ending on brass castors, the legs inlaid with boxwood lines, on the front legs there is also an inlaid garland with a string of bell flowers, above this are four drawers with original pierced swan neck handles, boxwood inlay and satinwood crossbanding on the drawer fronts, the desk having a black leather writing surface with gilt decoration, then you have the lovely shaped super structure, on each end is a false drawer below a shaped flap which opens to reveal on one side small compartments and a pen tray, and just small compartments on the other end, then you have two concave doors and another door in the middle between small drawers and pigeon holes, there are also two small drawers in the middle cupboard. On top of the super structure are letter slots into the concave cupboards, it’s crossbanded all over with satinwood and inlaid with boxwood lines and on the flaps and doors inlaid with urns. Circa 1920.

Early 19th Century satinwood bookcase
We use cookies to ensure that we give you the best experience on our website. If you continue to use this site we will assume that you are happy with it.Ok
Scroll to top