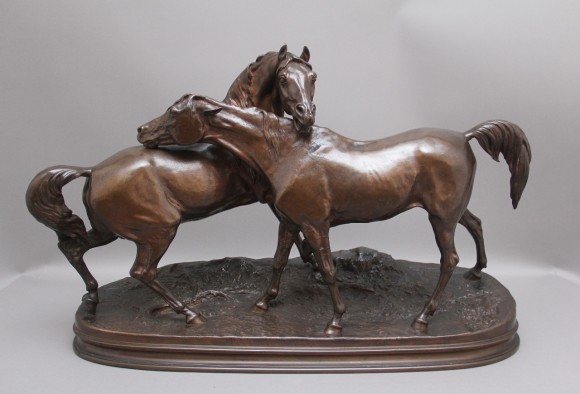 A large mid-19th Century animalier bronze of the Accolade by Pierre-Jules Mene (1810-1879) Featuring an Arab stallion and Mare, superb detail throughout and having a wonderful rich dark brown patina and in excellent condition, raised on naturalistic base and signed “P.J.Mene” This animalier bronze was made in three sizes and this is the largest one of the three. The bronze has the Barbedienne foundry mark on the base. Circa 1860.

Pierre-Jules Mene was a French sculptor and animalier who is considered one the pioneers of animal sculpture in the 19th Century and to this day is remembered as one of the finest, and certainly the most prolific, animalier sculptors of all time.

A large and impressive early 20th Century mahogany partners desk
We use cookies to ensure that we give you the best experience on our website. If you continue to use this site we will assume that you are happy with it.Ok
Scroll to top